Where to Find the Best Marchés de Noël

A visit to a Paris Christmas Market is the fastest way to get into the holiday spirit when visiting the City of Light during the shortest days of the year.

With sparkling lights, Christmas trees full of bright decorations, and even occasional visits from Saint Nicholas - or Père Noël, as Parisian children call him - these festive street markets filled with Swiss-style wooden chalets transport a tradition begun in the Middle Ages in Alsace and Germany to the French capital.

Copy the Parisians - sip hot mulled wine, munch on roasted chestnuts, and sample delicious sausages and cheese while shopping for arts and crafts, festive Christmas decorations, regional food specialties, and other gifts until well into the night.

During a typical year, about 15-20 Paris Christmas Markets appear across the city, joined by additional "pop-up" markets lasting just a day, a weekend, or a few days.

Traditionally, these picturesque markets span the Advent season beginning four Sundays before Christmas.  This year, look for opening dates from mid-November to mid-December.  Although a few markets stay in place for only a week or two, most remain open through Christmas Eve and some continue to stay in place until early January.

Here are Paris Discovery Guide's recommendations for 7 of the biggest & best Paris Christmas Markets, plus additional smaller and pop-up Christmas Market locations around the city.

More about Christmas in Paris


The spectacular Hôtel de Ville Christmas Market would win the prize (if there were one) as "most beautiful" this year thanks to the gorgeous light show bathing the building's neo-Renaissance facade with falling snowflakes dancing across a brilliant blue background.


Although the Canopée des Halles Christmas Market easily ranked as one of the largest Paris Christmas Markets just a few years ago, it has now shrunk to one of the smallest, with only 20 or so chalets offering sausages, Belgium waffles, and other seasonal specialties, plus vin chaud (hot mulled wine).

Under the Canopée, an enormous sparkling Christmas tree reminds you that more shopping and dining opportunies can be found among the shops inside the multi-storied complex. 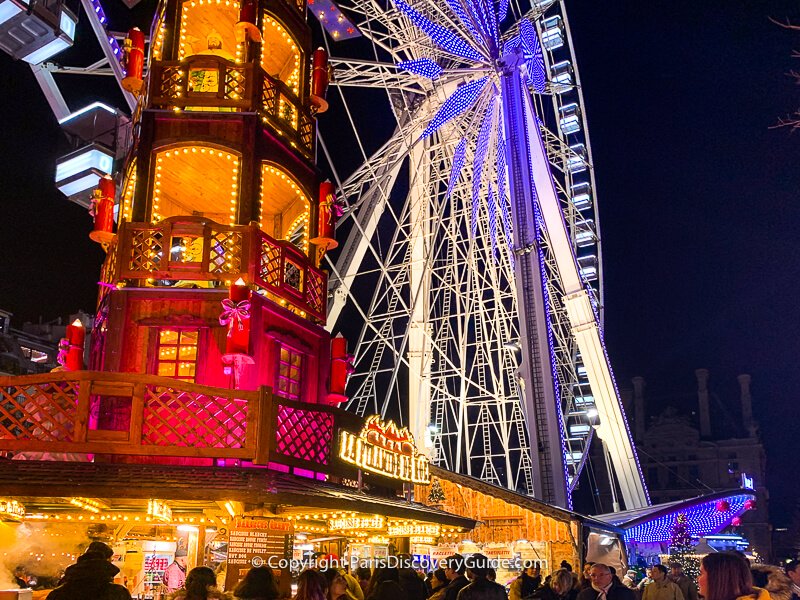 La Magie de Noël (The Magic of Christmas) in Tuileries Garden next to the Louvre grew out of the former Champs-Élysées Christmas Market and is huge - by far the biggest Marché de Noël within Paris, stretching along the garden's entire north edge from Rue des Pyramides to Place de la Concord.  It is also easily the most popular, attracting over 10 million visitors each season.

What's the theme at this market?  Fun, entertainment, food!

La Magie de Noël truly is magic.  Come experience it for yourself!

And even though Champs-Élysées no longer hosts this popular Christmas market, you're only five minutes by foot from the famous boulevard's dazzling Christmas lights and decorations - so exit Tuileries Garden near Place de la Concorde, and walk over to see them.

Getting to Tuileries Christmas Market:

Perhaps the most picturesque of the Paris Christmas Markets is the Marché de Noel Notre Dame, located in Square Viviani on the Left Bank's Quai Montebello just across the Seine from the famous cathedral.

Despite the tragic fire last April, the Marché de Noël continues this December.

With Notre Dame's soaring medieval towers as a backdrop and especially poignant this year due to the cathedral's near-destruction, this cheerful market offers the usual vin chaud (hot mulled wine) and roasted chestnuts.  Occasional appearances by musicians add to the festivities.

However, its specialty is high-quality arts and artisan crafts made in France.  You can usually find an especially nice selection of gift-worthy clothing and accessories here, as well as fancy gourmet foods.

Best of all, Santa makes frequent appearances - sometimes with a glass of vin chaud in hand.


Getting to the Marché de Noel Notre Dame:

Fortify yourself with a cup of warm spiced wine and a small packet of hot roasted chestnuts, straight off the grill - look for Vin Chaud and Marrons Chaud signs, or just follow your nose.  Alternately, you can also join the crowd at the Champagne bar!

For kids, there's a brightly lighted carousel, and usually appearances by Père Noël on the weekends.

This is a fun market to visit if you want to get a taste of the Christmas markets but avoid the crowds filling the larger markets.

Coming here is also a great excuse to explore the winding hills of Montmartre and make your way to Sacré-Coeur to enjoy the sweeping city vistas.

The 40 or so chalets of this Christmas Market border Boulevard St-Germain next to the famous St-Germain-des-Prés Church.

This is one of the city's best mid-sized markets, and specializes in luxury items, such as fine leather pocketbooks, lovely jewelry, French gastronomy products, and handcrafted items.  This is a good place to buy scented candles, leather-bound notebooks and bags made in France, and fine chocolates filled with liquor.

Fortify yourself with the usual hot mulled wine and roasted chestnuts as you walk past mouth-watering displays of artisinal macaroons, marrons glacés (candied chestnuts) from Southern France, and jewel-like jars of fruit jams.

More Fun Things to Do & See in Paris at Christmas

The huge Christmas Market along the Esplanade at La Défense boasts 350 chalets, making it the largest in the Paris region.  The holiday decorations and displays next to it on the Esplanade are also fabulous.

The market's spectacular setting in this glittering business district make the 9-minute ride from the Étoile/Charles de Gaulle metro station well worth your time - plus you'll find a vast selection of gifts ranging from trinkets to high-quality jewelry and leather goods, and well-equipped kitchens and restaurants turning out steaming plates of delicious Alsatian fare and Spanish-style paella.

One stall features many different varieties of exquisite nativity figures at surprisingly affordable prices - you may be tempted to fill your suitcase!

Several stalls offer gorgeous finely-tooled leather goods from Morocco, while others have large selections of fashionable scarfs and coats, candies, and tins of herbal teas.

Kids will also find lots to do and see here, including multiple Santas who happily pose for photos and a small pen filled with very cute miniature donkeys for petting.

You can easily spend an entire evening at this market.  And definitely plan to have a meal and glass or two of wine here - this is one of the best Paris Christmas markets for dining.

Planning a trip to Paris during the holiday season?  Use this Paris hotel map to find hotels near your favorite Christmas markets:

More ways to save on Paris hotels & apartments

Where to Find More Christmas Markets

12 More Paris Christmas Markets for You to Explore

Pop-up stalls come and go in some areas, so you will most likely happen upon them.  One area where this frequently occurs is near Galeries Lafayette, across from the main building on Blvd Haussmann.  Look for luxury goods, such as perfume, designer scarves, and fine leather gloves.

Even the regularly-held Paris street markets expand their offerings at this time of the year.

For example, even the small tucked-away Marché Saint-Honoré (Wednesday afternoon/evening and Saturday until 3pm) in the 1st Arrondissement expands with stalls offering knit garment, fancy confits, and jewelry.

Where to (Maybe) Find a Pop-Up Market

Pop-up Christmas markets, by their nature, are ephemeral and can be hard to find if you don't live in Paris - but a place always worth checking is the spacious Halle des Blancs Manteau (48 Rue Vielle du Temple, 4th Arrondissement), an old covered market dating back to the early 1800s in the heart of the Marais.

If you don't find a pop-up market underway, you'll find plenty of other shopping opportunities in this part of the Marais - or walk a few more blocks to Village Saint-Paul (currently undergoing reconstruction, but ignore the mess and enjoy the number of shops still open while the work progresses).

Opening dates vary - but the larger markets usually open during the middle or end of November, or early December.  Closing dates vary from just before or after Christmas to New Year's Eve or even early January.

A few smaller markets wait until mid-December to open.  Pop-up markets may take place for only 1-3 days.


More Articles about the Christmas Season in Paris

More Fun Things to Do in Paris at Christmas

More to Do in Paris in December

Paris Hotels near the Louvre